as you may have noticed, last Tuesday our place «El Taller» has been evicted.

The reason of this eviction is that the buildig is on sale, as it has always been before and during the time we were using it.
We think this is not enough to want us out: what will happen is that the garage will stay empty until someone will buy it, but who knows when this will happen?

The RVG Company should start to invest money for something good for the neighborhood instead of employ the useless security team that stands around the garage during those days.

Unfortunately we didn’t had time to organize something for the neighborhood to say goodbye and thank you, as the date of the eviction was not sure.
With this letter we want to give thanks to all the people who supported us during all this period, we will remember our staying in Bessemerstraat 23 with a big smile, it has been wonderful and it’s also because of you all.

On Friday 24th of May, El Taller will celebrate the late arriving of the spring in Amsterdam with a tasty vegetarian barbecue and friendly sports tournaments : soccer, table football, basketball and ping-pong.

The participants will be asked to put on their finest sportswear. Colorful and tacky clothes are welcome !
If you don’t have any sportswear (it happens), you can have a look in our free shop, starting at 13h the same day.

Anybody is welcome to subscribe to the Table Football Champions’ League El Taller Edition until 22h.
When the inscriptions are over, the tournament will begin !

Food and activities on donations.

Benefit Voku – Wed 15th of May

This is just another story from the countless we can tell. Not being able to pay an astronomic amount of money every months for an insurance and later on being portreyed as a CRIMINAL.
A colleague got sick by ocular infection and went to the hospital for research during 10 days.The bill is currently reaching 3180 euros !
The person isn’t able to work, of course.
If he doesn’t pay, he will be prosecuted and turn out to be a criminal.

This story pictures pretty well this vicious circle in which we are all living in.

Come to join us for a delicious meal and let us try to raise up a benefit ! 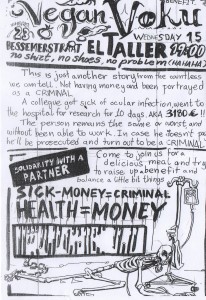 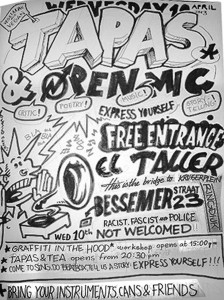 We’ve changed and enriched a bit our program!
From this month we will alternate a VoKu with a Tapas Bar:
during the VoKu you can enjoy a vegan dinner and during the Tapas Bar we will serve drinks and FREE Tapas!
We have a lot of table games and a nice table football!
After this, on Fridays we will open our Free Shop, where you can bring home different stuff for free! If you have things that you don’t need anymore, don’t throw them away, bring them to our place, maybe somebody else will need them!

All the events are of course free entrance!
See you at ‘El Taller’!

Thanks for the neighbors for their curiosity, smiles and supports ! We had been nicely surprised to receive so many visits and questions during the Open Day.
If some of you missed it, you are more than welcome to pass by tonight during the Voku, even if you don’t plan to eat !

On Saturday 16th of March, an open day is organized to show the new face of Bessemerstraat 23 after two months of occupation.
We also want to talk and exchange ideas about projects and activities that will be established in a close future.

Coffee, tea and collation will be gladly served !

Here are the eagerly awaited pictures of the garage, as we found it the day of the action ; no light, no heat, but a lot of enthusiasm. 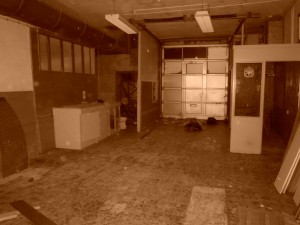 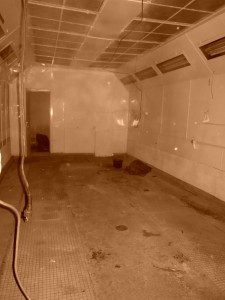 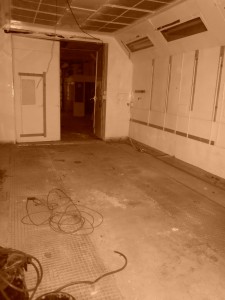 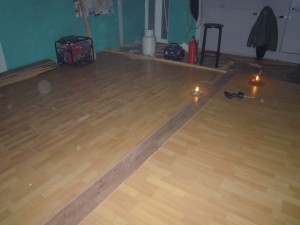 Everyone is welcome to lend us a hand anytime !!

On Sunday the 27th of January 2013, Bessemerstraat 23 (Amsterdam oost)
has been squatted.

The owner of this Garage is the company RVG WONINGONTWIKKELING B.V. run by Theo Jansen, Herman Veenendaal and Mehmet Faruk Kinran.
The previous owner of the building was the company De Hibsekrib B.V., which bought it on the 14th November 2007 and fastly sold it on the 31st October 2008, immediately before the crisis started, for 325.000 Euro to the actual company.
On the 15th of December 2008 a private signed a renting contract with the company valid until the 31st December 2010.
No official renter has been using this space since 2010 and the garage has been unused until today.
On the 3rd of September 2010 the RVG WONINGONTWIKKELING B.V. got the environment permits and in April 2012 the destruction permit.
Still Nothing has happened.
RVG voluntarily put the Bessemerstraat 23 on auction on 21 Mei 2012. Someone offered an amount of € 245.000 but RVG did not want to sell for such a price. The property was not sold.
They want to build a four apartments house: [http://www.mva-makelaars.nl/veilingx/object_archief.shtml?counter=4921]

Now let’s talk about this company…

- The RVG mother company is Stichting Beheer Aandelen Th. Jansen Holding, which controls 54 companies. Most of them are registered on these two addresses, Ratio 16, in Duiven (property from S.W. Properties I B.V. # 0908223) and Utrechtseweg 181, in Oosterbeek (property from Villa Eureka B.V. #09144383).

- In 2006, Theo Jansen had quite some companies registered at the Beekhuizenseweg 1 in Rozendaal, which is still property of the Restaurant ‘The Hunting Lodge B.V.’ [http://www.thehunting.nl/] (#09055924), also owned by RVG.

- In 2007 a quite big scandal sees the RGV involved with the police:
The Gelderland-Midden police get accused of nepotism for facilitating some building entrepreneurs, in particular about several locals that have been sold to the company RVG [http://spokhq.squat.net/node/198].

For all those reasons we decided to take this empty space, and for the future we are planning to use it as a social center.
Questions, suggestions,ideas,help and visits are welcome.
You can find us on Bessemerstraat 23 or on bessemerstraat23@squat.net